"Simplicity is the ultimate sophistication"

After finishing the 2014 Spartathlon in a pair of leather sandals I've been taking a lot of flak along the lines of:

"Of course you can run in sandals - you slow plodders aren't really running, are you? You could never run, say, a decent marathon."

So I decided to prove folks wrong, and wearing the same pair of sandals that carried me through the Spartathlon I set out to do a sub-three hour race at the 2015 Copenhagen Marathon.

I did 2:56 and that REALLY annoyed the nay sayers. Not just the choice of footwear, but the entire setup:

And though this certainly isn't the beaten path to a decent marathon, let me walk you through why this may not be as crazy as it sounds.

Forget about dressing up as a super hero or wearing a clown costume to get attention during a marathon - if you really want to turn heads, just wear a pair of thin leather sandals:

If you've been reading these pages before, you probably know the rationale by now:

I simply believe that our body has all the shock absorbers it needs, so there's no need to mess up the machine with thick soles and cushioning - in fact, when it comes to footwear, less is certainly more.

I'm no big proponent of going all barefoot though, as it has a tendency to cripple your running form - most folks can't stay loose enough to reap all the barefoot benefits.

(This is another topic and I'll write up some more on this later - grab my tips to injury free running to get on the mailinglist that will be notified when it happens).

So let's instead focus on how running sandal clad is different from running in minimalist shoes.

I've been running in minimalist footwear since 2004, but it took me a good 10 years of running before I got around to trying out a pair of sandals.

Up until then it all seemed a bit too hippie, best left to old guys sporting long beards, and, of course, the amazing Patrick Sweeney.

But when I was testing various shoes for the 2014 Spartathlon, I figured I might as well give the sandals a try, just to say that I covered all options.

And I haven't looked back since.

(You can read the full rationale behind choosing sandals for that endeavor.)

Going 42k in a big city marathon isn't quite the same as running 246k on a Greek highway though, and where the Spartathlon just spared me a single blister after 80k, this marathon landed me two - one on each foot.

I'm thinking this is because: 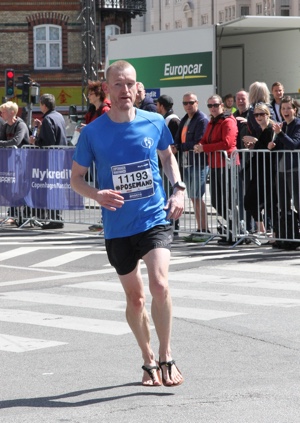 The third bullet is obviously just the work of a moron, and this can be remedied. Whether fixing this issue will outweigh the first two is up in the air.

An actual comparison of various sandal models is out of scope for this article, but for the record, I wore the Luna Equus - the Rolls Royce of the Luna Sandals, and in my opinion by far the most accomplished model.

Obviously because of the really thin sole, but also due to the full elastic straps that just keep the sandals in place at all times - I did not adjust my pair a single time during the marathon.

You will have to look long and hard for any runner or coach who believes you can do a sub three hour marathon without running intervals or hard tempo runs.

In fact it drives the "no pain, no gain" crowd nuts when I tell the world that I hardly ever do an interval session or a hard tempo run, and that my bread and butter sessions are slow, steady runs in the 5:30/kilometer range (that's close to a 9 minute mile, in case your brain hurts.)

I'm not saying that intervals and tempo runs are no good, but in the training for myself and those I coach, they hardly exist.

We mainly use intervals and hard runs for two things:

The reason we don't go faster is simple: by increasing intensity you increase the risk of injury. And the curve is not linear, meaning that you quickly step into the danger zone and beyond.

The same goes for long runs - they serve more as a mental challenge than anything else. The classical long run tends to wear you down more than build you up.

My runners and I therefore mainly base our training on the Maffetone principles and make sure to spice things up with focused strength training and ground movement (MovNAT style, for you movers out there.)

The main differentiator in whether you will perform or not is continuity. Get in your daily run and avoid injury down time. Then it's less important if you follow a structured program - steady does it.

My own training is 100 percent mood based: I run practically every day, but whether it's five or 15 kilometers is less important. The main thing is that I stay injury free and that I'll be looking forward to running again tomorrow.

Putting all cards on the table I haven't run a single interval for almost a year, and as for tempo runs, I've done exactly three, all in the week leading up to the marathon. I didn't do those tempo runs for the training effect, but simply to get a feel for what my race pace would feel like. That way I could enjoy the marathon without being zoomed in on my Garmin all day.

These three runs were 3k, 10k and 3k again. Beyond that I've done nothing but slow, steady runs for the past many months, adding up to a weekly milage of 60-70k (roughly 40 miles.)

I've got plenty of explanations about this take on interval training and training volume over at the Danish HQ - I hope to start translating it all for you soon.

Lacking the traditional structure in training I had to look elsewhere for race day improvments. And all that took was a look at my belly...

The quickest and easiest way to gain an edge on race day is to simply loose a few pounds. Even the leanest athlete can trim the love handles a bit, if only for a while.

Five weeks before the marathon I was at 85kg (187 lbs), which was slightly heavier than normal, so I turned to my proven procedure for race day trimming: The Flatfoot Guru Weight Loss Protocol™.

Like all advice in this article, this too is alarmingly simple, and plain old tenacity makes all the difference:

Obviously this model is extra advantageous to folks like myself, who has a long lasting romance with both cake and beer.

By following this simple protocol I dropped four kilograms and ended up at 81kg (178 lbs) on race day.

Exactly what difference this made on my finishing time is obviously hard to tell, but I'm pretty sure that the smile covering my face the last few miles would have been hard to keep up if I had to carry 4kg (10 lbs) of extra cargo along with it and still make it to a sub-three hour finish.

Running on empty? No problem

Now we're at the last surprising fact of the day - the 300 calories that carried me through the race[1]. I had excactly one bag of GU Chomps for energy during the race.

In all honesty I did get a wee bit of energy drink from the tables along the way too, but not more than a couple of mouthfuls - beyond that it was just pure water, and I didn't bonk or feel the slightest discomfort, energy wise.

Which is unusual, given the amount of sugar you can find in the belts, vests and pockets of the main marathon crowd.

My experience here is pretty straight: Eating excessive amounts of sugar on race day does nothing but mess up your stomach and you might just find yourself standing in line for the loo at mile 20, darning yourself, the race and all thing running, as you realize that this wouldn't be your day either.

So despite my love of cake, I do in fact constantly work on becoming a better fat burner, which roughly just means living according to a diet resembling the LCHF model.

The key to get by on fewer calories on race day is to adjust your everyday diet - not to search for some magic energy source on race day itself. For a good intro to this subject, check out Bob Seebohars "Metabolic Efficiency Training".

There are many ways to a successful marathon, and mine is just one of them. But regardless of which route you pursue, my advice is this:

I don't have the One True Answer to how it's done, but I do have a severe case of allergy to bullshit, and I roll my eyes when I see folks complicating the joyful activity of running, turning it all into a science.

I firmly believe we're better off with:

We are born to run and we don't need a whole lot of technology to make it to the finish line - we've been doing just fine for a couple of million years.

For a good start to the lesser approach to running, grab my guide to running injury free and you're off to a great start on implementing the foundation for the continuity in training that'll make a difference in your running career.

[1] Really kilocalories, but since everyone is saying "calories" when talking about "kilocalories" I'll go with the common way of putting it.

Over the years I've coached more than 1,000 runners to an injury free running form.

This is my best advice on getting started:

Get the free guide